Preparedness in Action: What Happened When Wildfires Hit Agoura Hills 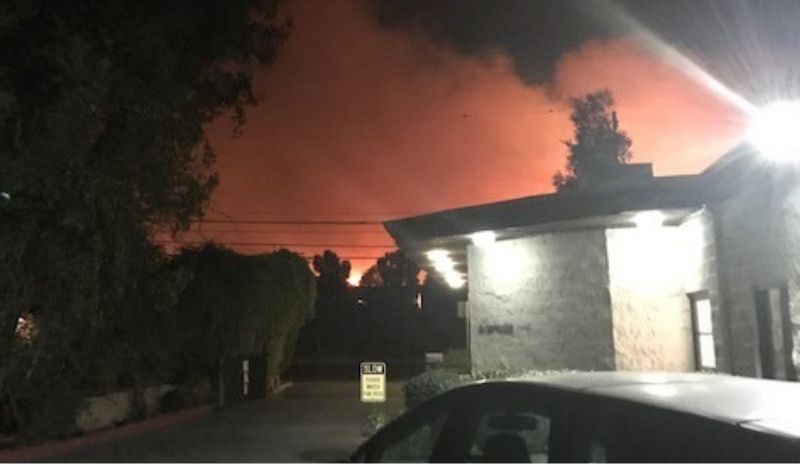 September is National Disaster Preparedness month and Jess Safani-Franko, Hospital Manager of Agoura Animal Clinic in Agoura Hills, is sharing her first-hand experience with us. This is an amazing look at what preparedness looks like in action at our practices.

What is it like working in Agoura Hills, where a wildfire threat is possible?

I love it in Agoura Hills, which is a suburb north of Los Angeles. There are mountains, hiking trails, and many properties are zoned for livestock, so there are clients that have farm animals as well as dogs and cats. Having grown up in a more urban setting, I fell in love with how Agoura Hills was more open and peaceful, while still being close to Los Angeles. However, wildfires are a real danger here.

I've always been interested in emergency preparedness. When I was in elementary school, at the beginning of the school year, our teachers would ask our parents to provide us with an "earthquake bag," which was really just a gallon Ziploc bag with emergency contacts, a sweatshirt, and some snacks so that if we had an earthquake at school, we would be warm and fed until our parents could pick us up. When I moved out to Agoura and learned about the wildfire history and risk, I wanted to make sure that I would be prepared for the worst so I could take care of our staff and our patients if needed.

Did you have a disaster plan before the Woolsey Fire in 2018?
Jess and the team at Agoura Hills joined the VetCor network of practices in 2020

Actually, I did! I am part of a veterinary practice manager group that met up every 2 months before COVID, and during our meetings, we would tackle an HR topic, a safety topic, and have a guest speaker present information about a specific subject. It was invaluable to me as a new manager to be able to pick the brains of more experienced PMs. At the end of one of the meetings, we were talking about how it would be a good idea to learn some emergency preparedness tips, and I volunteered to do the presentation.

I worked with the Agoura Animal Shelter and Ventura County Animal Services to find out their evacuation plans, spoke to the fire department, attended a meeting at the Malibu City Hall, and contacted FEMA. I got so much information from all of these sources, and it was all free!

I put together the presentation and shortly thereafter, the Thomas Fire erupted in Ventura County. It was terrible - so many people had to evacuate, many lost their homes, and then there were mudslides that followed because there was so much loose soil after the vegetation burned. I spoke with a few practice managers that had been to our group when I did my presentation, and they let me know that they were able to use a lot of the information to evacuate both their hospitals and their homes, and I was so glad to hear that!

What did you do first when the Woolsey Fire was coming closer to Agoura Animal Clinic?

Well, initially I was more concerned about the Hill Fire, which ignited earlier that day near my home in Thousand Oaks, just north of Agoura Hills. Our community was still reeling from the Borderline mass shooting, which happened the night before, and 12 people were tragically killed. The whole day at work was so somber, and then I got an alert on my phone that there was a fire close to our house. My husband was working from home that day, coincidentally, so I left work and hurried home so we could get ready to evacuate if needed. I always have a "bug-out bag" packed in case I have to make a hasty exit. In my bag, I have a flash drive with all of my important documents (copies of our mortgage paperwork, homeowner's insurance, birth certificates, passports, driver's licenses, banking info, etc...), a change of clothes, a spare pair of glasses (because I'm blind as a bat without them), some cash, food, water, a multi-tool, a headlamp, extra batteries, an extra cell phone charger, a written list of my emergency contacts, a copy of any prescriptions, and a portable radio. I also have one for my dogs and tortoise!

When I finally got home and loaded up the car, I was watching the news and following Twitter like a hawk, and that was when I noticed that the Woolsey Fire was becoming more of a danger to the southeast, and that Oak Park and Agoura Hills were directly in the line of fire. I was hoping that fire crews would be able to get it under control, but it became an inferno.

I couldn't sleep that night because I was glued to the news, and around 2:00 am, I started texting one of our lead techs because the fire was getting closer and closer to our hospital. Our chief of staff also texted me, and I told him that I was on my way down. While I was driving, I called our local emergency hospitals to see if we could transfer our hospitalized cases, and they were amazing and agreed to help however they could.

By the time I got to the clinic, the fire was raging and it was so bright that it almost looked like daylight. I could see flames clearly across the freeway. Fortunately, I had a binder ready to go with all of our important hospital documents, employee contacts, client numbers, inventory lists, and my coworker went around with her phone, recording the hospital property in case we had to make an insurance claim.

We had several pets boarding with us, so our chief of staff's daughter made photocopies of the paper charts with the boarder's information on them, got their food and meds ready to go, and put them in crates or on leashes. We called each client to see if they were able to pick up their pets, but we just ended up taking most of them home with us. We turned off the gas and disconnected our oxygen tanks, made a sign for the gate letting first responders know that the hospital was vacant and everyone had gotten out safely, and we were able to get in and out fairly quickly.

Soon after we left, the fire jumped to our side of the freeway and burned through Malibu to the ocean. Our hospital was thankfully unscathed, except for smelling like an ashtray, but our entire city was under evacuation orders for a week, so we had to stay closed until the order was lifted. Once we had determined that there was no immediate danger to reenter the building, I went in for a few hours each day to fill important prescriptions for patients. We stayed in contact with our client base through email and social media posts and made sure to post updates multiple times a day.

How did the clients react when you reached out to them about the next steps for the pets?

To be honest, I have always tried to stress the importance of emergency preparedness with our clients, but I feel like most it's something that most people know they should do, but always think they have more time, so they put it on the backburner and then end up kicking themselves when an emergency happens.

For me, having a plan instilled a sense of calm because I had gone over it multiple times in my mind, and was able to focus on what needed to be done and accomplish it quickly and safely.

Because fires are unfortunately a common state of affairs now in California, I'm hopeful that more of our clients will be prepared for the next one. I always try to include some information on emergency preparedness for new pet owners or for clients with a new puppy or kitten.

Jess’s experience in California can be applied to any of our practices. She encourages practices to talk to their city representatives, check out FEMA’s free resources, as well as this government website which covers many types of disasters and how to prepare for them.