Dr. Cox, is the Chief of Staff at Northside Animal Hospital. 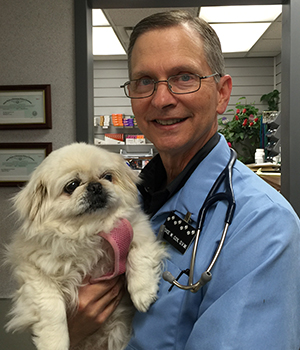 Veterinary medicine has been very good to me. High school in Waxahachie, Texas brought a great vocational agriculture teacher who stressed involvement in leadership and public speaking. I was an FFA kid.

With a love for animal agriculture, rural people, and life sciences, veterinary medicine was the career that encompassed all three. Lots of studying and football games at Texas A&M prepared the way for veterinary college. The tremendous course load was bearable through the camaraderie with my great 137 classmates.

Then I was off to Tyler, Texas to a classic fire-engine, mixed-animal practice. My first boss was a patient and hilarious man. I looked so young at 25! After a couple of weeks to orient myself to the surrounding countryside, I went on my first farm call. When I met the farmer at the pasture gate, he looked in my truck, then behind me on the county road and asked, “Son, is the doctor comin’, too?”

Thick skin is good to develop, until you earn your clients’ trust!

After five years, a beautiful Tyler wife, and one daughter later, opportunity knocked loudly. And, I bought it! My own clinic was deeper into East Texas. Off to Nacogdoches we moved. Solo practice was too hectic for mixed animal medicine; so, I became a small animal practitioner. The work was rewarding and the clients were very appreciative… especially the local comedic radio personality who showed up in full scrubs, mask, and gloves with his English bulldog for her scheduled C-section!

At the time, it was tough to get a technician or another vet to move to that part of Texas. My secretary was the anchor of the front half of the clinic for more than a decade. College kids were my helpers, and I trained art majors and aquatic biologists to prep surgeries and to hold off veins. With the clinic paid off, and I knew inside me that another change was due.

Now with three daughters, and my wife willing to change, I sold my business. We moved to Waco, Texas where I attended the Baptist Seminary at Baylor University and went to work for Dr. Jerry Stewart at Northside Animal Hospital.

The small animal practice was well run with staff who had been there for 10 to 15 years! I was amazed after my revolving door of college students in my solo practice. After completing my seminary studies, opportunity at a rural church opened. I became “Doctor Pastor” to folks like Harry, the cowboy who often comes to worship still with his spurs on from early morning work! After hours, I got calls from church members who need counsel sometimes for a bovine dystocia, and sometimes for an unruly teenage son!

Dr. Stewart died after a short but well-fought fight with lung cancer. And, his widow sold the clinic to a corporation. A corporation? We had heard the horror stories from a relief vet. But, from the initial contact, I sensed a difference from my preconceived notion. VetCor Chief Operating Officer Steve Prelack assured me that I could practice veterinary medicine better than he could, and, as Chief of Staff, I could continue to make my own hospital decisions for medicine and surgery.

Yet, VetCor knows business! The support given by the corporate team has relieved most of the historical stressors of owning my own practice associated with payroll, insurance, software issues, staff meetings, and capital purchases (we have a GREAT digital radiography unit!) to name a few. They have been true to their word.

For 29 years, I was a fiercely independent veterinarian. After 3 years with VetCor, I am getting used to having a bigger team approach than just the local clinic. I even joined Team Texas for the Summer Activity Challenge! You ought to try it!