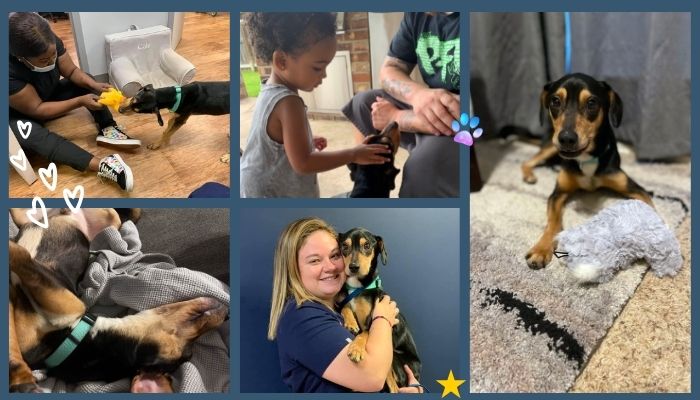 When Dr. Niccole Bruno showed up for her shift at Companion Animal Hospital in Spring, Texas, on Thursday, June 24th, she realized right away that it would not be a regular day. Instead of letting herself inside and going about her usual morning routine, she found herself face-to-face with a tiny black and brown dog who had been tied up outside the hospital and left with a big bowl of food overnight.

She could’ve called animal control to let them come get the abandoned dog and bring him to a shelter but, an animal lover through and through, Dr. Bruno decided she was going to help him herself. Right away, she sprung into action. Once she was able to approach him and get him inside to check him out, she determined that the little guy, who she and her team have since named Ralph, is at least a year old, weighing in at merely 14 lbs. Ralph had a few open cuts, his paw pads were burnt from standing on hot cement for a prolonged period, and he tested positive for heartworm disease - but Dr. Bruno and her team were determined to patch him up and give him a shot at a better life than the one he came from.

Ralph has been in Dr. Bruno’s care for about three weeks now, and a lot has happened since she initially took him in. First and foremost, Ralph is happy. His wounds are healing, his paws look better, and he’s not timid around the team. He carries around a toy duck he was given like it’s his baby and eating has become one of his favorite hobbies. In fact, he’s gained four pounds since his arrival. They're also working with him to reduce possessiveness around food and toys, a behavior not uncommon in dogs who have experienced neglect, and they're confident Ralph will make a great addition to someone’s family with just a little bit of training.

If you’ve heard the phrase “it takes a village,” you should know it’s absolutely true - and Ralph has a village on his side. For the time being, he’s staying at the hospital, so he can be treated for heartworm disease, a process that has been made so much smoother thanks to the kind donations of antibiotics, immiticide, and a toy from Zoetis and prevention products from Boehringer Ingelheim. In addition to tending to his medical needs, Dr. Bruno is also working on socializing Ralph with her daughter and working to limit his marking behavior, so his manners will be tip top when he’s ready for the next step in his journey.

We know that with Dr. Bruno and her team behind him, Ralph will be 100% in no time. Plus, we’re excited to report that he’s already piqued the interest of a potential adoptive family. It’s because of Dr. Bruno (and everyone else who wanted to help a pup in need) that Ralph will have a second chance at life, and we couldn’t be prouder.

This isn’t the first time one of our practices has gone above and beyond to help a pet like Ralph, and we know it certainly won’t be the last.