How They Got Here: Gayle Cefole, Regional Manager

Gayle is a regional manager for the Northern New England area.

There are generally two approaches when taking on a new position - you can dive in head first with your own way of doing things, or you can dip your toes in, feel the water, and see how the other swimmers approach the waves. 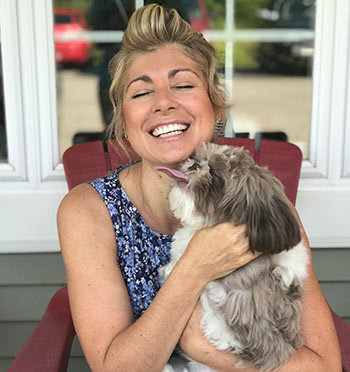 Gayle Cefole, Regional Manager for the Northern New England area, was so grateful and almost taken aback when VetCor told her to take the latter route when she joined VetCor in 2015.

“Most businesses are about numbers and jumping in with both feet immediately. But I took their advice and concentrated on putting people in front of processes, and I have never stopped doing it,” said Gayle.

By adapting this philosophy, partially born out of an experience at a discotheque in Madrid where she was attending an industry conference, Gayle has realized that one of the most important qualities of an effective team leader is to listen.

“Give your employees an ear to bend, share ideas, encourage, care, and the possibilities are endless,” said Gayle. “I’ve also discovered that I learn more from my teams and colleagues than they do me. In this role, the best service I can do for them is to encourage, listen, support, and to first and foremost care.”

Prior to joining the team, Gayle was Practice Manager at Countryside Veterinary Hospital in Chelmsford, MA for over 15 years. She considered herself a corporate outsider before taking on her current role, but she has been so encouraged by VetCor’s belief that fostering meaningful relationships and focusing on your team is the only path to sincere success.

“VetCor facilitates what can be the hardest part of a relationship – the introductions. They open doors and place us in each other’s paths with a goal to maintain the integrity of each unique hospital culture, by appreciating the people and practices that made them great,” said Gayle. “It’s a beautiful and brilliant thing.”

Public speaking and attending conferences has been an integral part of Gayle’s career development and growth both as a VetCor team member and prior to coming on board. Her philosophies on managing and working with people have been nurtured through the process of meeting new people at conferences all over the world.

“I was always drawn to meeting new people, learning from them and sharing new ideas about our craft, and I often found this need was best fulfilled while attending conferences. This led me to explore public speaking,” said Gayle.

It’s very easy, Gayle said, to be engaged at a conference. The hard part is staying motivated to keep in touch with new contacts and putting the powerful information exchanged at the conference into action during your day to day.

“I enjoyed the energy and excitement of the presentation process, but the most exhilarating moments and rewards, came when the fanfare was over. The topic was now in the air, awakened in the minds of the attendees and other speakers,” said Gayle. “My friendships were expanding, my professional dreams began to feel within reach, and my world began to get much bigger. I realized I wanted to make a difference in a way that helped veterinary managers feel they were not alone, picked them up when they made a mistake, and encouraged them to get back on the ‘energy bus’. I didn’t want to just fly in, hope to inspire someone in the room, fly off and go about our separate lives, not knowing if they kept the fire burning or if they had fizzled out.”

In 2013 while Gayle was in Madrid, she really began to feel she needed a new path - a new goal - as is bound to happen when you are constantly traveling and short on sleep. The weariness from a lack of sleep, the excitement of being on the other side of the world, and perhaps a little Rioja wine really made her think about what she wanted to pursue.

“A friend, a veterinarian and professional speaker, pointed out to me, that what I had been searching for as my path was not consulting – it was coaching. I sipped on my delicious riojas wine and thought quietly to myself, that I was on the other side of the world engrossed in a completely different culture, realizing we are all the same, finding myself and finding my purpose,” said Gayle.

Que VetCor and their philosophy on building meaningful relationships - suddenly, that night in Madrid didn’t seem so random.

“VetCor has given me an outlet to build and foster real, meaningful relationships with my teams, many of whom mean the world to me personally as well,” Gayle said.

As Gayle’s VetCor family continues to grow, so does her own family. Married in March of 2018, she and her husband Mitch now share five children, four cats, a hamster and a tarantula.